The site is secure.
The https:// ensures that you are connecting to the official website and that any information you provide is encrypted and transmitted securely.

The term “Safe Routes to School” was first used in Denmark in the late 1970s as part of a very successful initiative to reduce the number of children killed while walking and bicycling to school. SRTS spread internationally, with programs springing up throughout Europe and in Australia, New Zealand, Canada, and the United States.

The first modern SRTS program in the U.S. began in 1997 in the Bronx, New York. In 1998, Congress funded two pilot SRTS programs through the US DOT. NHTSA issued $50,000 each for SRTS pilot programs in Marin County, California and Arlington, Massachusetts. In July 2005, Congress passed federal legislation that established a National SRTS program. The program, which was signed into law in August 2005, dedicated a total of $612 million to SRTS from 2005 to 2009.

A successful SRTS program benefits children and your community in several ways. 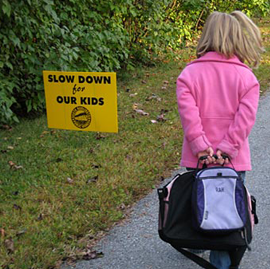